Quilterie has been  posting for 18 months.  Due to a slight hiatus in actual sewing activity I thought it might be time to slow release some older quilts.

I really enjoyed making the specimen below.  I had to concentrate completely on placement or the courthouse steps would have resembled "Law and Disorder".   That eventually became its name. 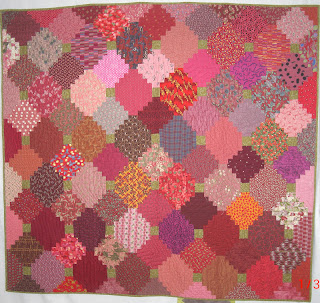 Oops!.. Sorry about the wonky photo.

While I was making "Law and Disorder", I came to realise that the greatest interest lay with the large scale fabrics.  Although the colour palette was planned to be olive green for the centres and reds for the lanterns, I learned how to extend the idea of red.  There are  reds, pinks, oranges, burgundies, purples, tans and brown.  The original idea came from a picture from a Kaffe Fassett book.  Now there are so many of them, I can't remember which one, but it was one of his earliest.

It has been long-arm machined.  I wanted a wavy pattern because I thought there were too many straight lines in the piecing, so the surface looks like a topographic map. 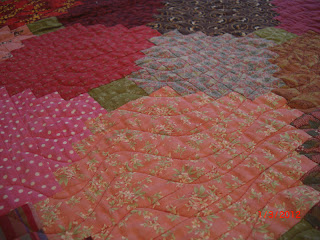 You may be able to see by the creases through the centre that this little baby (70" x 62") has been curled up in a dark cupboard, resting for some time.  It's time to bring it back out, don't you think?

If you have not noticed,  I have added a small piece to my left sidebar regarding Pinterest.  After reading a few blogposts  (thanks, Marianne)  regarding pinning photos I feel it may not be as innocuous as it appears.  If anyone knows the code to opt out of having your photos pinned it would be nice if you could share it.
Posted by liz at 10:25 AM

This is a very fun quilt, Liz! The wavy pattern is a nice contrast to the bold, graphic design.

It's wonderful. I have been wanting to make one. Maybe yours will inspire me.

I made this quilt in blues with yellow centers...it took more planning than I thought it would!

Come over to my blog and you find the code on how to opt out of Pinterest, I have three posts about it.

what a gorgeous quilt! i have always wanted to make that pattern, but don't have a large enough design wall to feel comfortable starting one.:) maybe some day.

Love your "oldie but goodie"! And I like the colors you used, definitely see if there is a way to give this one some display time.

This has always been my favorite log cabin style block and layout. I made a mini one way back when---these blocks are simple and great scrap users!

So glad you brought this out for a showing - lucky us. Love the colors and your choice for quilting - great combination of lines and curves.
It looks like a fabulous way to play with color.
Thank you for sharing - wonder what else will come out for us to enjoy??

Pink is my least favorite color, but this quilt is beautiful, Liz!

Thanks for sharing! I really like the piecework and quilt pattern contrast. Very well put together. The colors are awesome!! I haven't done, and won't do, the "Pinterest" thing. There are already so many "black holes" for time to slip through and I understand that site is a huge one. I quilt instead. I already have too many ideas.....just ask my DH!!!LOL! Hugs,

I do love courthouse steps and it looks great in your colourway. I'd love to see more slow release quilts.