My friend saw a quilt somewhere on the world wide web.  She didn't remember where it came from, but she sent me a picture from her phone.  It was beautiful and it was small.  So I copied it for her... 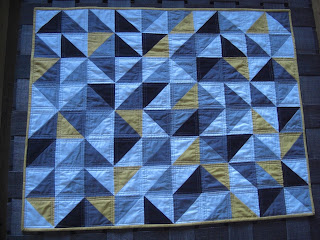 I would like to give credit to the designer, but unfortunately, dear friend didn't bother with that detail.  If you know where this quilt design came from,  I am very happy to edit this post and give credit. Such a simple pattern and yet so striking.

Also, fitted in with my solids fetish.

As to the title.  Well, I've been working on more window seat cushions and was using this fabric for the gusset 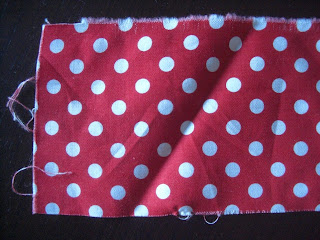 I tore the top of the fabric and cut the other side with my rotary blade.  I don't know if you can look closely, but you may see that the fabric  appears stretched at the top.  Not so on its bottom edge.  However, it is starting to fray there.


I've bought fabric around the world.  With the exception of a sadly closed shop in Sydney, and most of the fabric shops in Melbourne, all the shops I've visited cut.  I would be glad to hear your opinion in the rip v cut debate.  I don't pre-wash (tsk tsk) so perhaps there is an advantage to tearing. ie there aren't so many tangled fibres after washing.  I don't know.  If there are other reasons for tearing rather than cutting, it would be interesting to hear them.

Myself, I like to hug the nice clean cut fabric on my way home from LQS.

Over Easter I couldn't resist playing with fabric.  The pattern,  Hunter's Star has long been a favourite of mine.   The pink fabric is an Aboriginal print that is available at Quiltsmith. It has large ants running all over the surface in and around concentric circles.

I like the combination of fabrics but sadly the stars seem lost.  I'm not giving up and next  I'll try a similar version but with black stars.  These 3 blocks will become my first table runner.  I don't really do table runners...

An accident in the mail reduced the 24" x 6.5" ruler into 2 separate rulers.  Luckily, the day was saved by a little ingenuity.   After a few minutes in the workshop smoothing off the sharp edges and filing both sides down,  there are 2 more rulers to add to my collection.  I'm sure the 2.5"x 6.5" ruler will prove extremely versatile.  The larger 20"x6.5" will be handy as well. 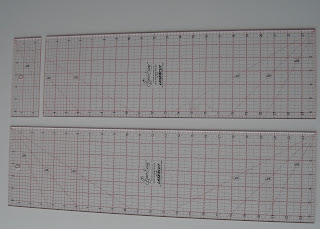 My quilt for Hanna is already finished.  Soile did a lovely job quilting it.  She kindly put the binding on as well.  She has posted a picture on her blog and here is another photo all the way from Finland.  The quilt is now on Hanna & Timo's bed. 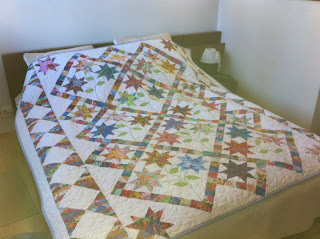 There are lots of unquilted tops lying around.  I am making an effort to finish off some older projects, such as my red and white quilt.  Here is a picture of the back: 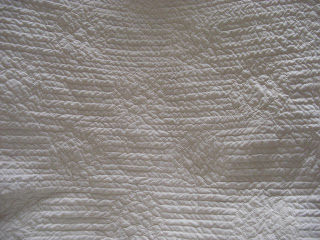 Like a picture of a polar bear in the snow, not very interesting unless you like hand quilting.  The lines are 1/2" apart, the feathers 6" diameter.  Slow going but I am enjoying the quilting.
Posted by liz at 11:10 AM 7 comments