Out of the Blue

Sometimes you get lucky.  That was what happened recently.  I met a woman who mentioned that her grandmother left her a quilt that her mother had made for her.  That is, she was in possession of a quilt made by her great grandmother.  A little persuasion was all she needed to show off her quilt. 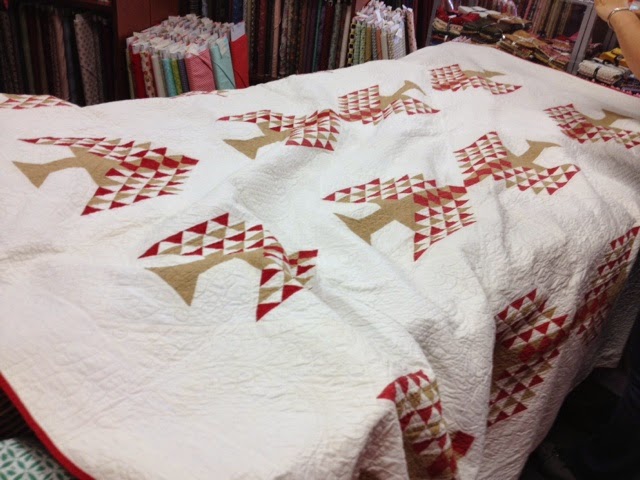 No-one else in the family wanted it.  Really?!!

Imagine the work that went into this beautiful quilt.  Hand quilted.  Heavily.  And well.

And then to see the quilt signed and dated.  I always do that now.  If you don't, you should.  It was wonderful to see evidence on the quilt of when it was made and by whom. 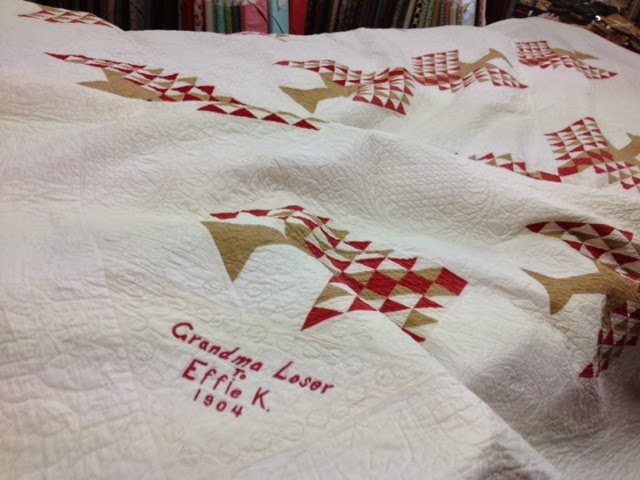 The label was embroidered by hand.

The colours are not accurate.  The red is fairly stable, although there is evidence that the quit has been washed - a small bit of red has crept into the white.  The tan was originally a green but the dye was a "fugitive". 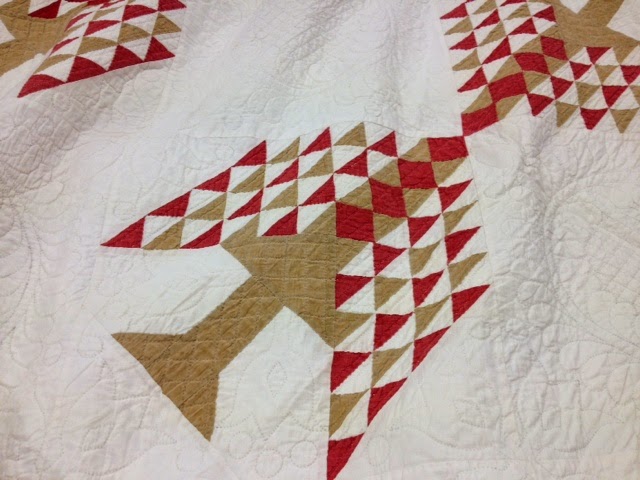 No, that isn't Batman's Robin making a statement.  It is the fabric I used to make lots of fussy cut 5/8th" hexagons. 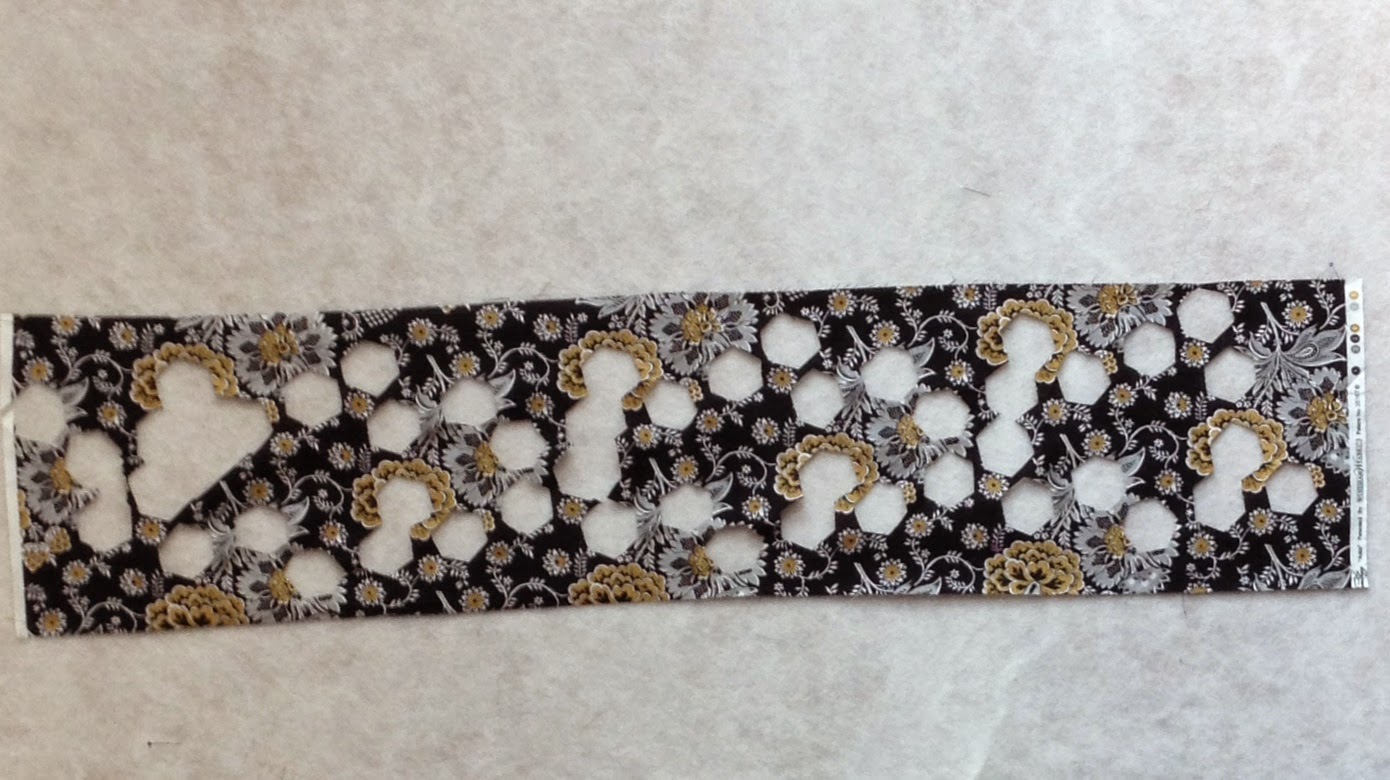 The repeat is less than 14" across and 6" wide so that only 20cm (8") fabric has produced eight different fussy cut flowers.  Yippee.  Much better than some fabric where a hexagon can be cut every 60cm due to the pattern repeat.

A 5/8th" hexagon cut from template plastic is useful to try to cut the exact same piece of pattern 6 times.  A permanent marker guides me to place the plastic so a pencil line can be drawn on the reverse of the fabric.  After a while the black lines get confusing so I have to wash them off. 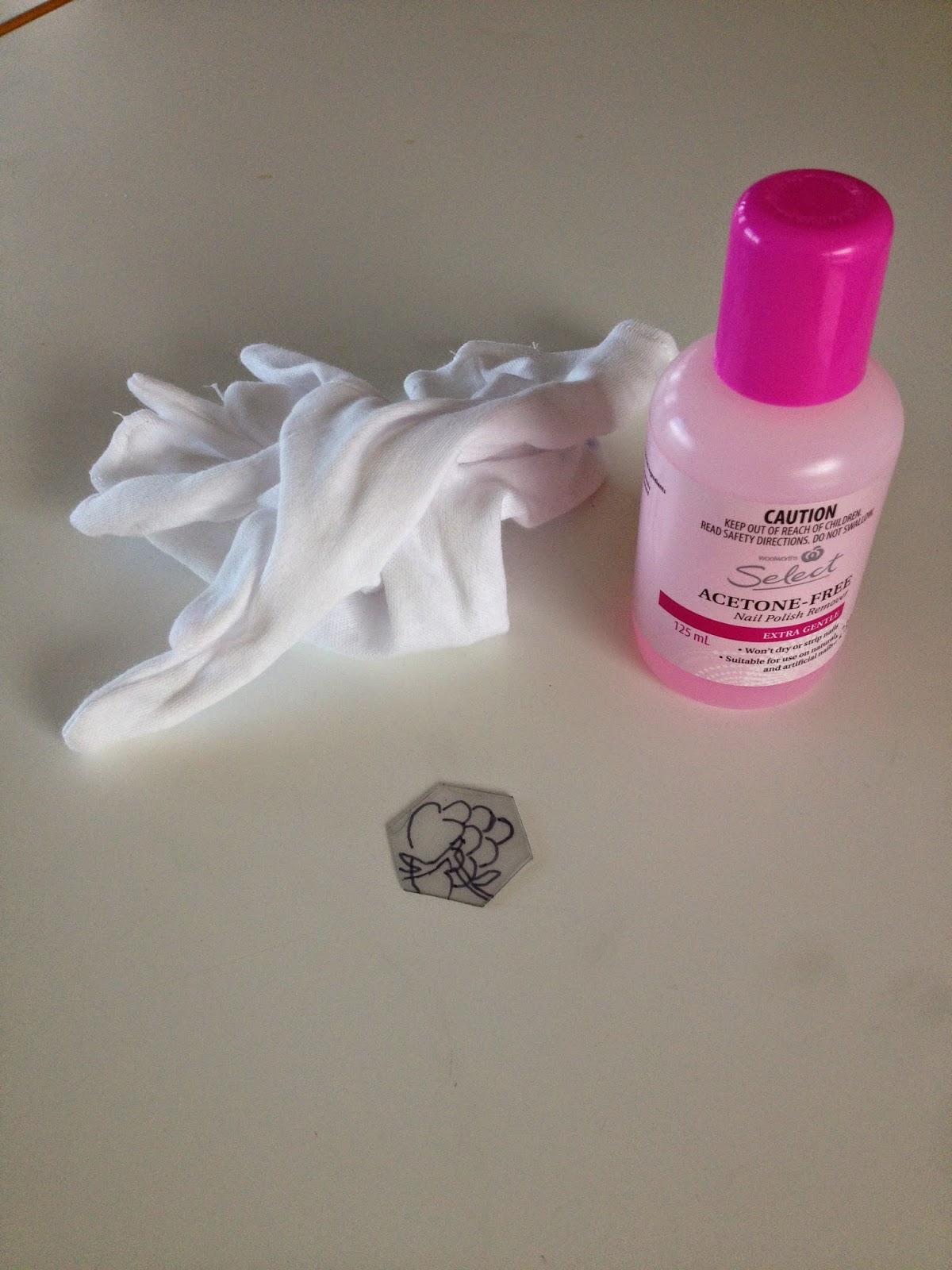 I have discovered that ethyl acetate (nail polish remover without the acetone) does a great job of removing the permanent black marker.  Next problem: how to remove black marker without also removing nail polish! 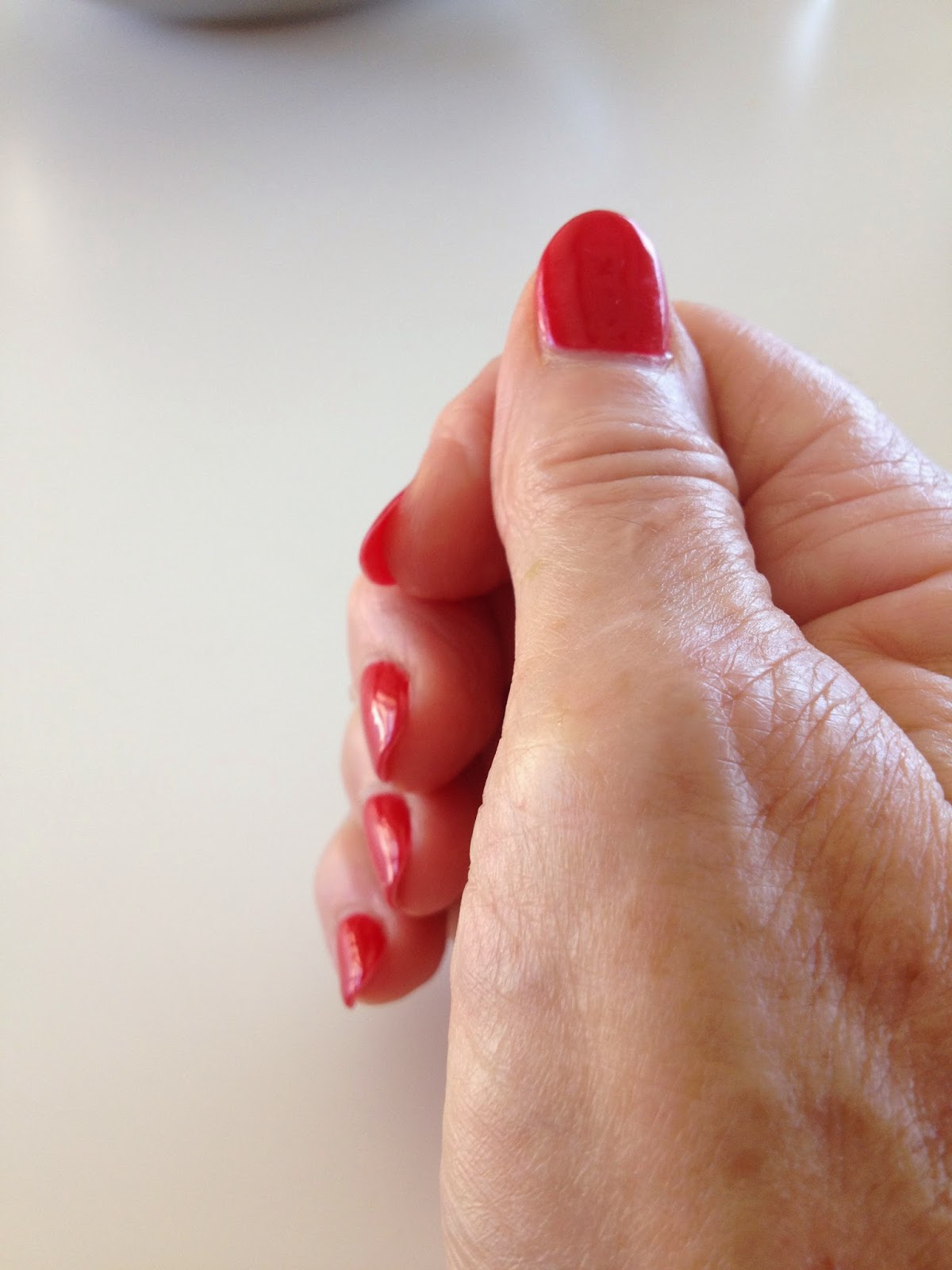 Since I have a basket full of white gloves, I have been using them.  You could just as easily wear washing up gloves I suppose. 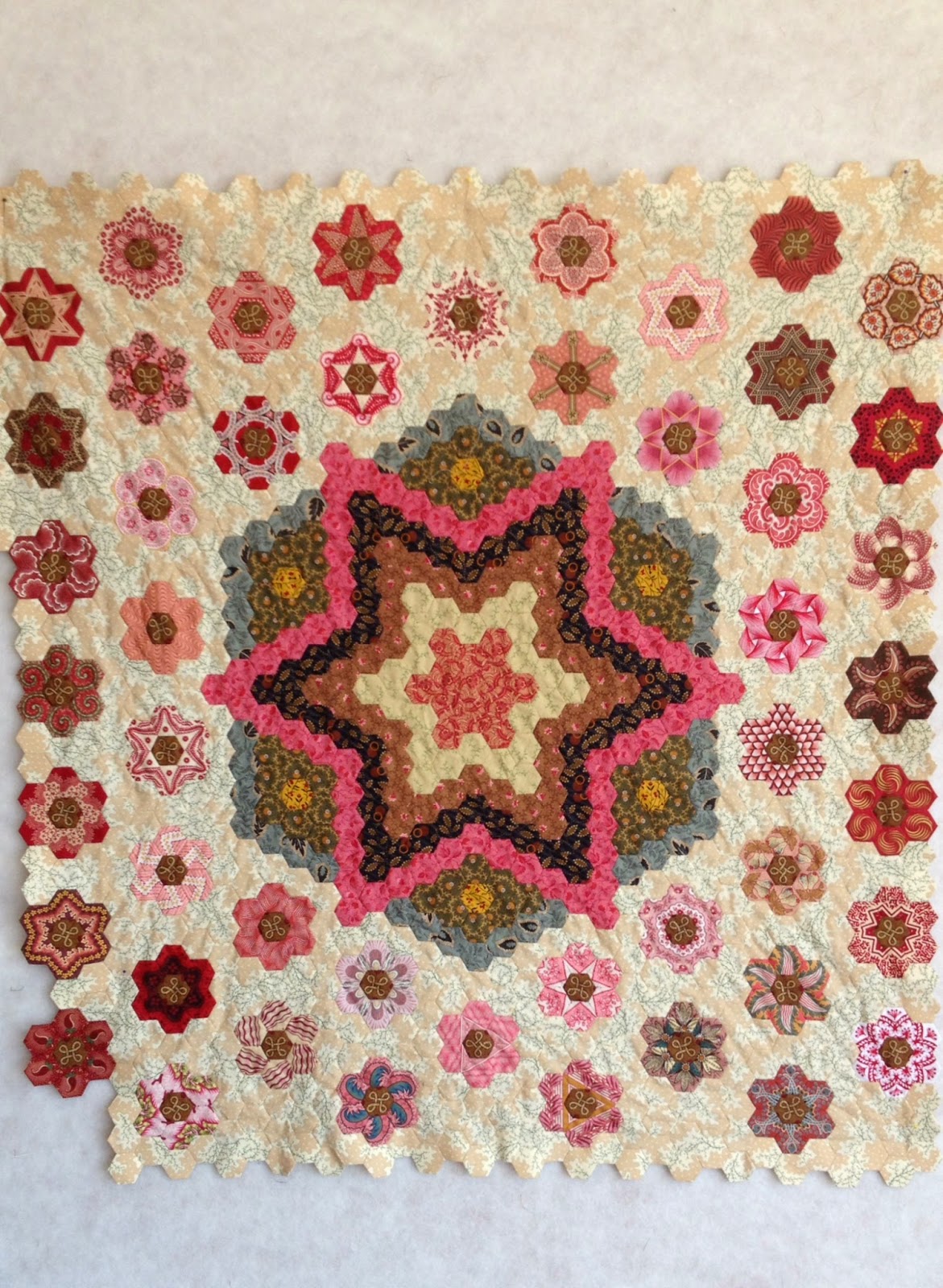 It is hoped that the  fussy cut flowers will appear somewhere in "Hexagonia" .  Yes, It has been in the dark recesses of the quilterie cupboard, but recently it has seen the light of day while I have been travelling.

How about this fabric.  I bought it in London.  Some of it is from designer Zandra Rhodes.  Do you remember her from the 60's and 70's? 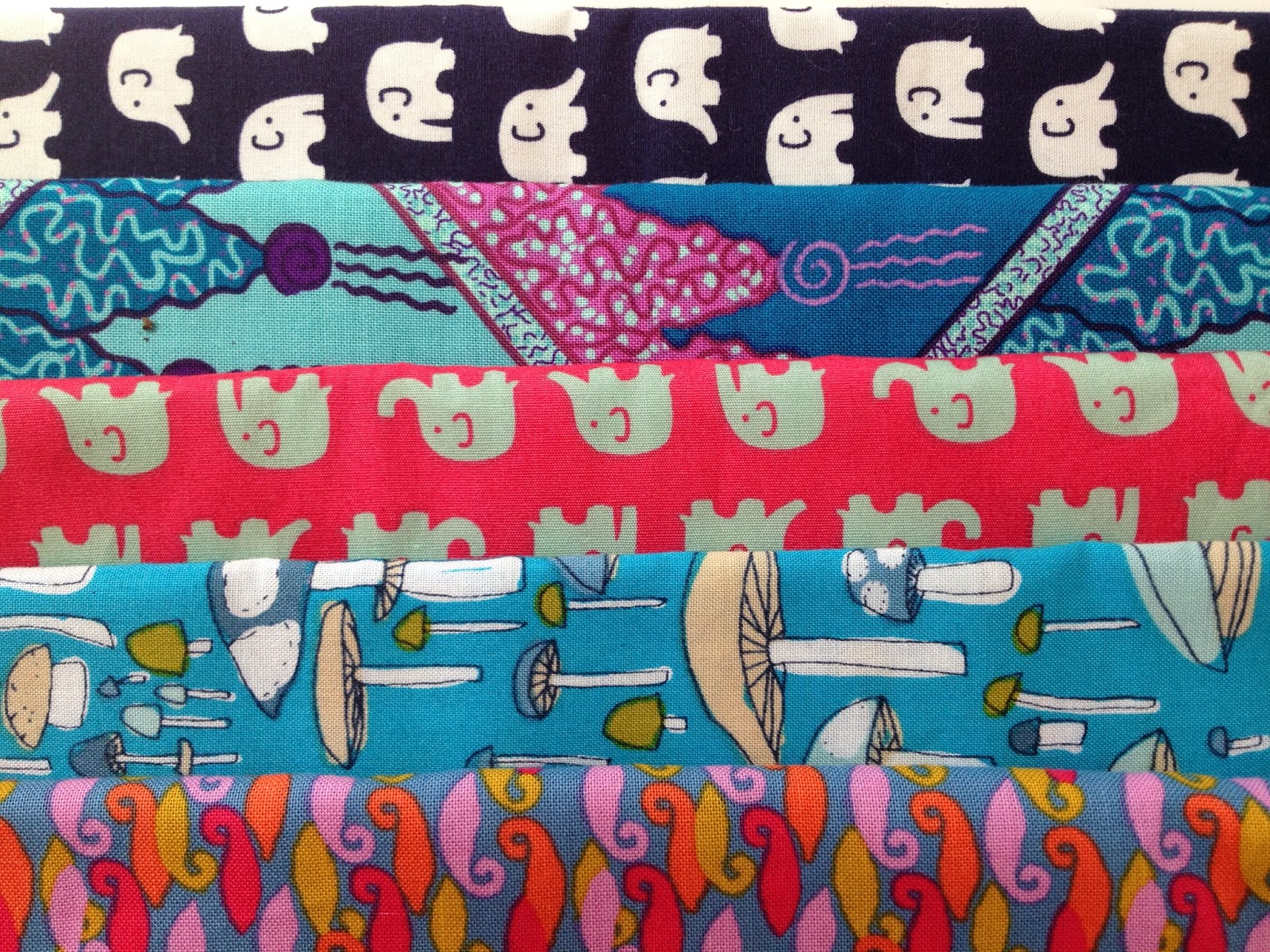 I've just come back from 2 weeks in England.  At this time of the year the conversation contains references such as "rather damp" and "quite chilly".  Nevertheless I had a great time travelling the length, not quite the breadth of England.  From Berwick-on-Tweed in the north to the Isle of Wight down south.

Not many quilt references sadly.  You can't drag people off to quilt related things and get away with it every time.  So I save my kidnapping for the must-see occasions.

On returning home, though, I caught up with all the lovely blogs and decided that I must do something about the state of my sewing space.  No before photos.  Just too awful.

I always start at the bookshelf.  Very easy to sort and tidy, although the shelves seem to groan under the weight these days.

Rather than emptying the bookshelf I added to it.  I brought back Kaffe Fassettt's newest book. 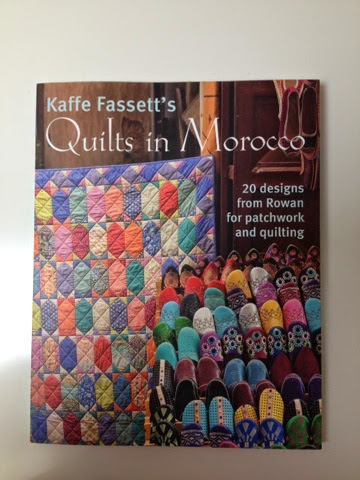 I also came across these two second hand books and bought them for 3 pounds each.  Bargain. 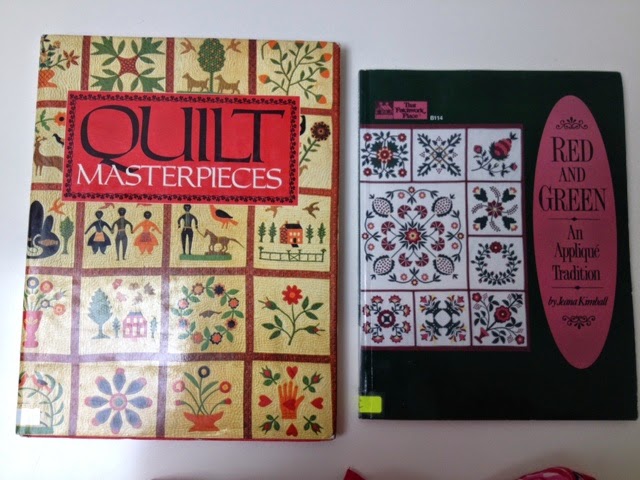 Throwing out books is difficult.  But this time, the plan was to be ruthless and throw out unloved magazines and ugly fabric.  If you look at the blogpost title, it isn't a typo.  I didn't actually do much throwing out at all.  It appears that I brought in more than I put out.  So I figure I was less than ruthless in the end.
Posted by liz at 9:23 AM 2 comments

Were you wondering what happened to all those 3" hourglass blocks I made?  Probably not.  By the time I made over 400 I got bored. 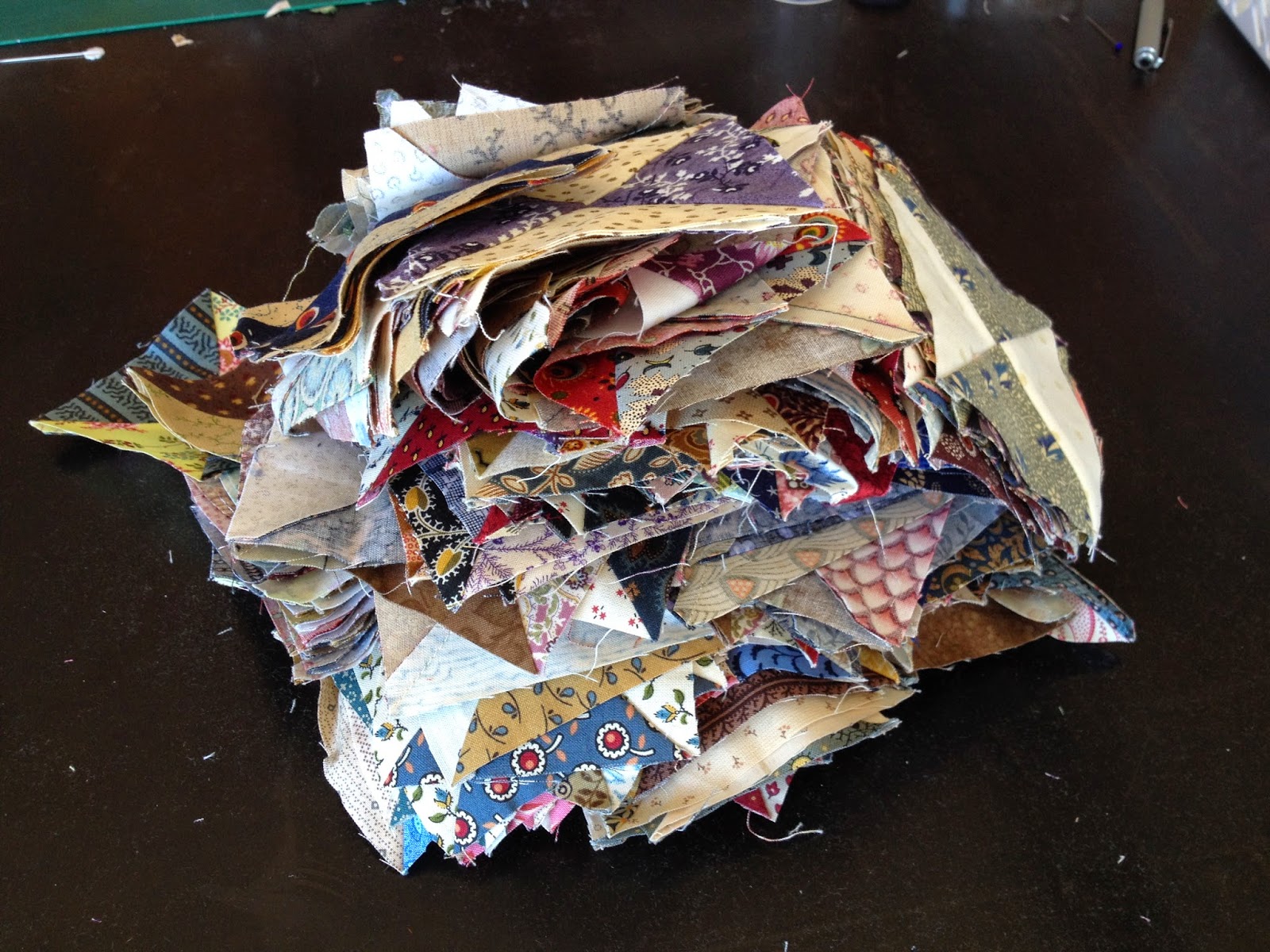 When I came back to them,  I decided to put them together and get some idea of what the quilt might look like. 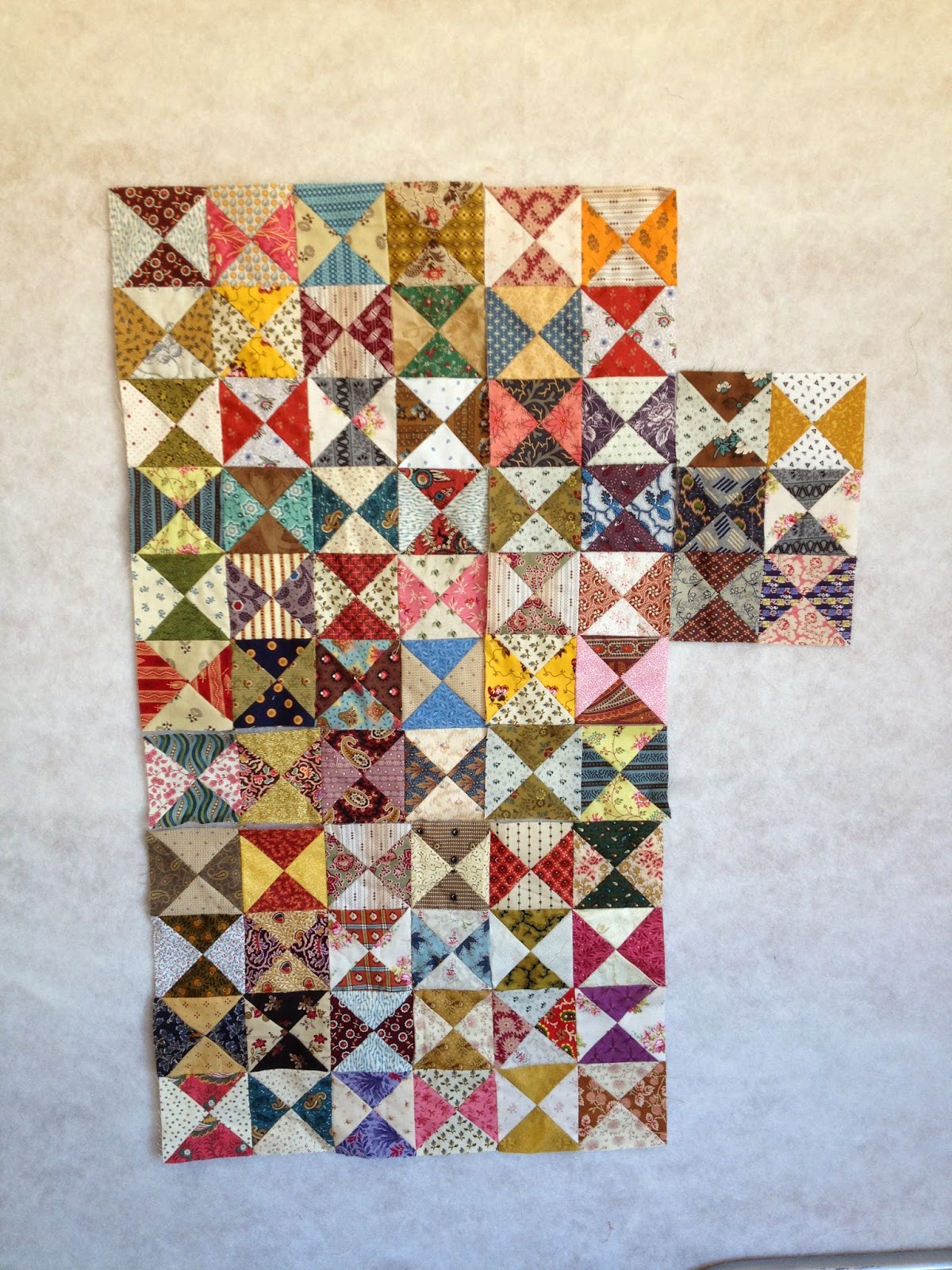 Because I discovered something that you, no doubt, already knew.  The point at the corners of each block is very bulky.  Eight seams meet there.   Of course I should have known better and made sure that the seams butted together correctly or "nestled".  Needless to say, I wasn't enjoying putting them together.  More than 400 blocks.

Too many to undo and fix.

So the new plan is to incorporate them into another quilt top.  One day.

Still quilting for my deadline.

Questions only, no answers.

When Barbara Brackman first started her weekly block downloads I was encouraged to join in by Janet.   She powered on.  So too did Kate.  I got distracted when I had thirteen blocks under my belt.
Other things called, until the book was published.  Armed with a copy of the book I started again 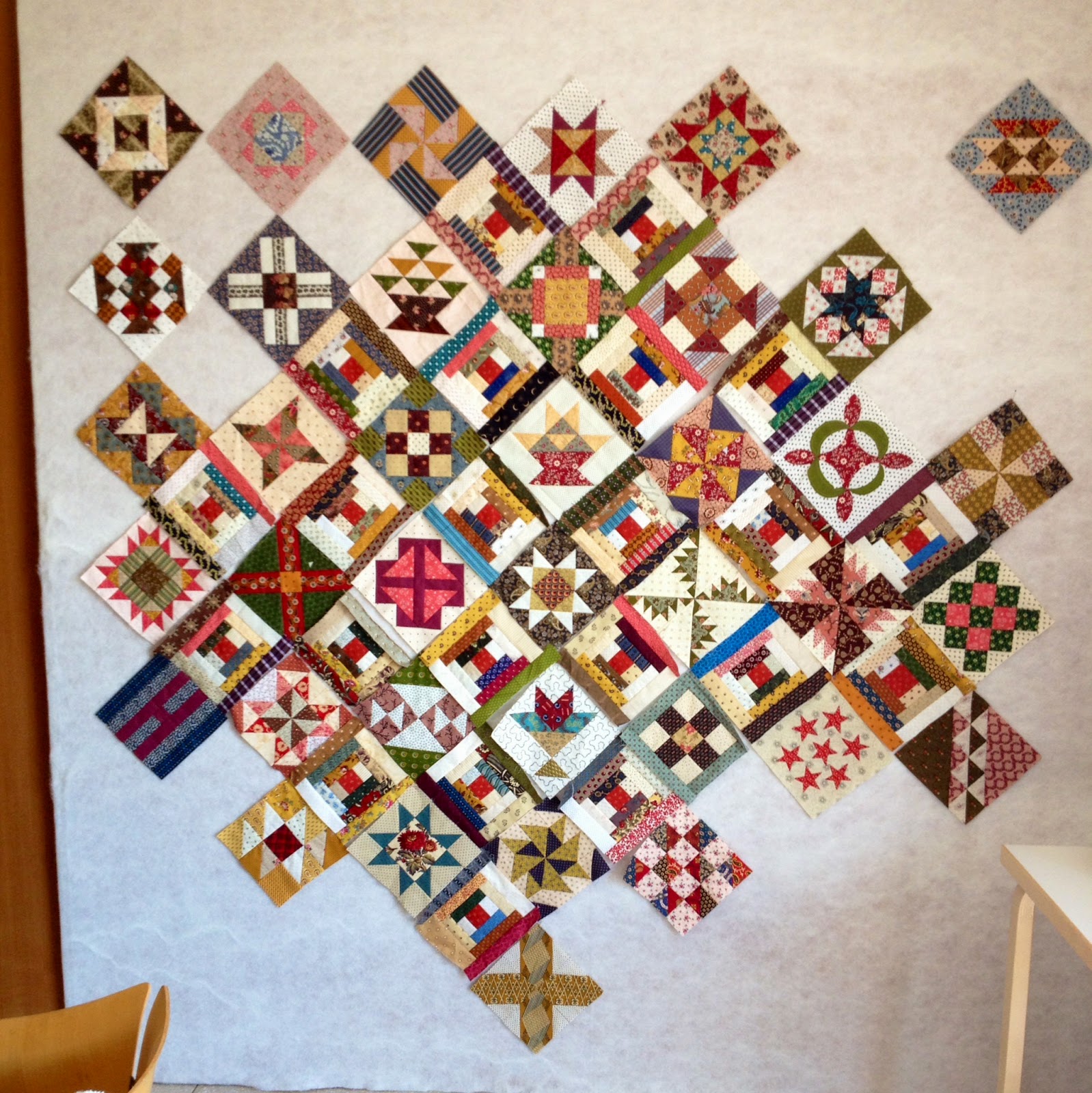 But I decided to do the quilterie setting.  So instead of approximately 52 blocks, there was an extra 52 courthouse steps blocks and setting triangles. 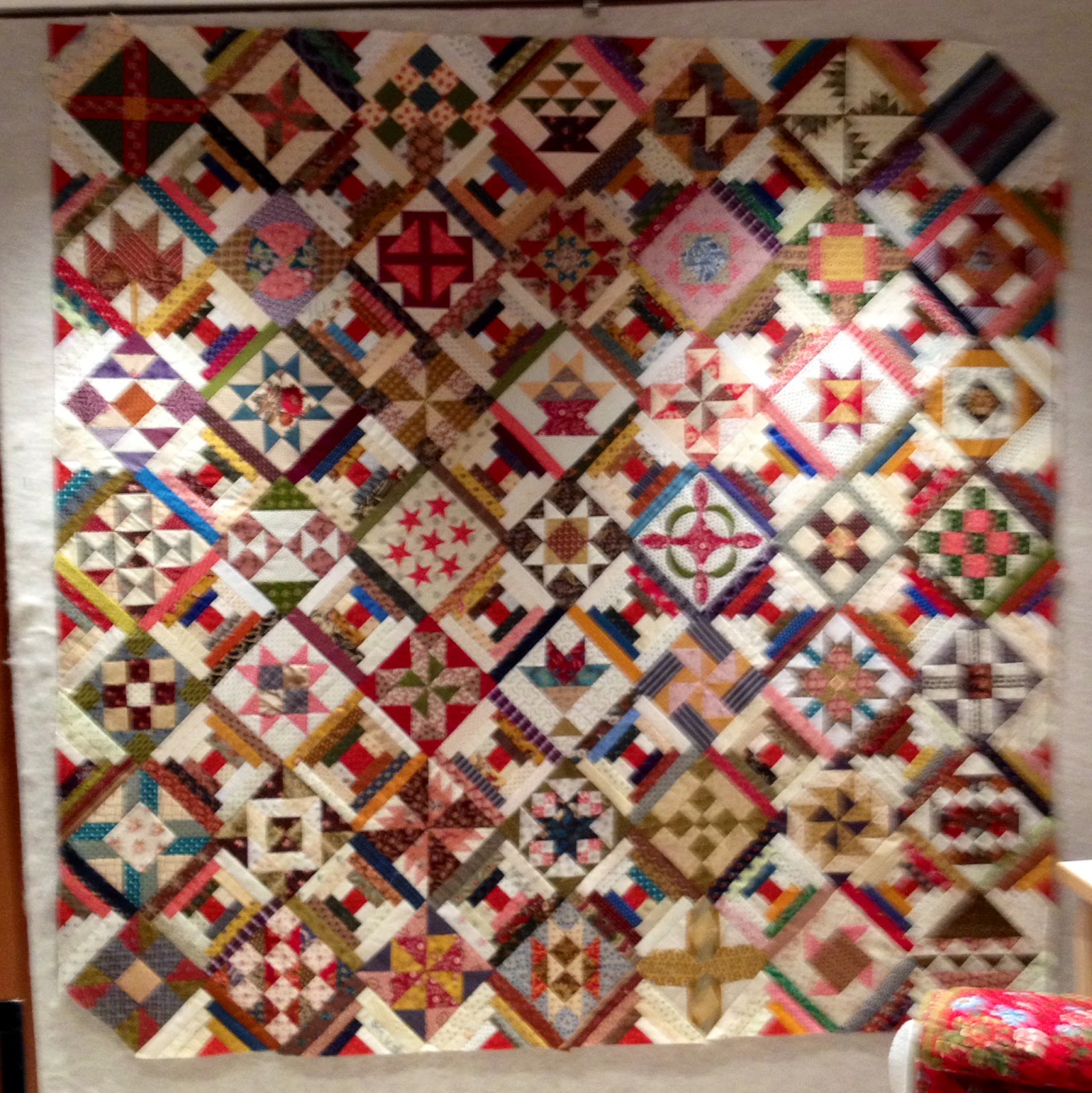 The top is now basted and on the end of an ever increasing list of quilts to be hand quilted.  I have only hand quilted one sampler - my very first quilt and I thought it would be fun to quilt each individual block differently.  I am not sure how I will do the courthouse steps blocks.  Suggestions welcomed.

Being an Australian, I deleted some of the more overtly American blocks.  That sounds ridiculous considering it is a Civil War sampler but I would imagine that non-Australian quilters would do the same making a pattern that involves emus, kangaroos and other identifiably Australian  motifs.  Is that right? or have I got it completely wrong?

I avoid fabrics with the American flag, too.  But then I wouldn't use fabric with an Australian flag either.

I caught this little vignette in Hyde Park. 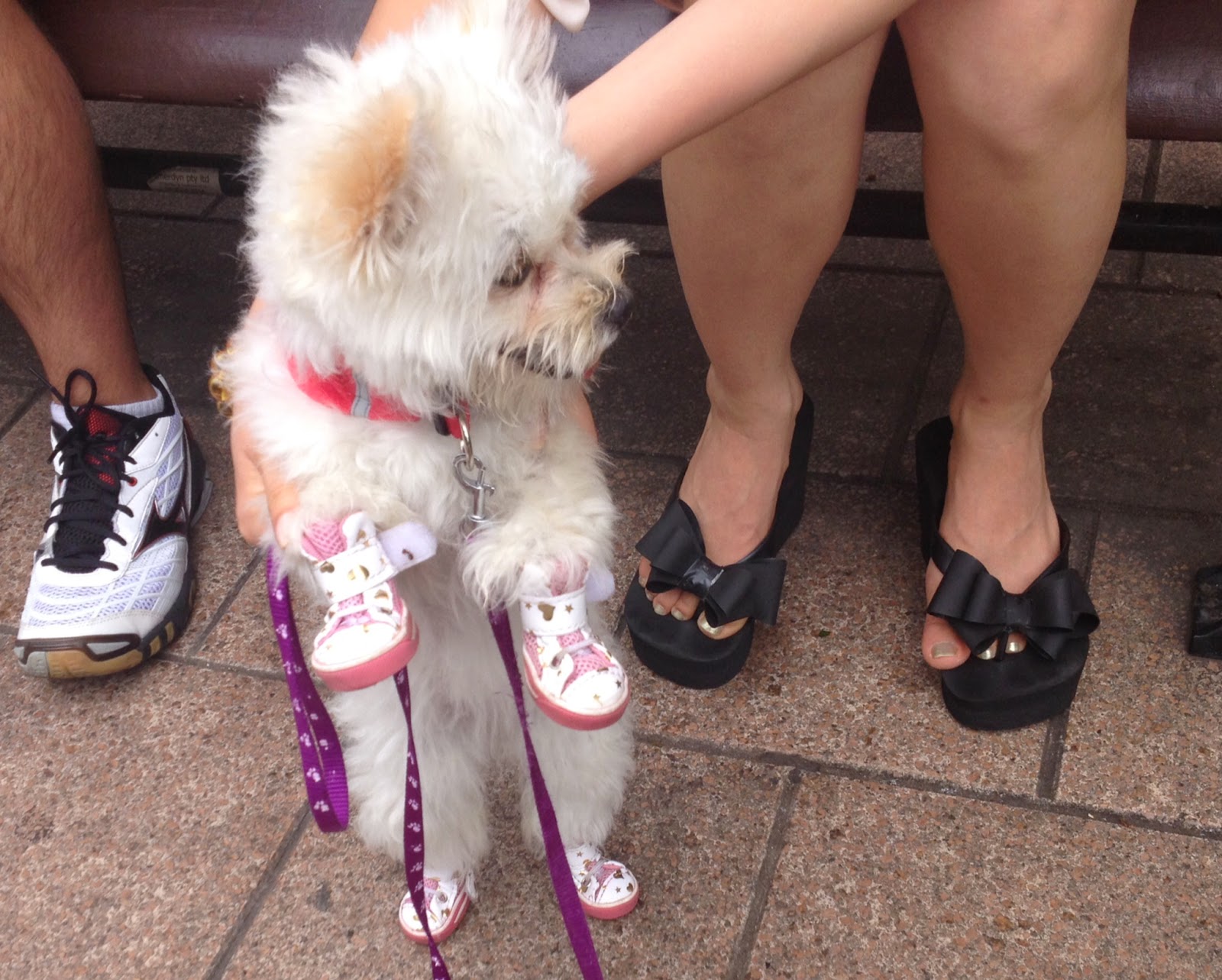 The dog could actually walk in the shoes but I asked its owner to hold it up so I could get a better shot of it.   I don't know whether to think how lucky it is or call the RSPCA.

For some reason I hand quilt only at night in front of the television.  So even though I have an almost impossible deadline mentioned in my previous post,  I still can't force myself to sit down and work on the border quilting during the day.  Beside, it has been unseasonably hot and sitting under a quilt during the heat seems like madness.

So that is how I found myself pulling out a very old project.  It started with the left overs from this quilt. 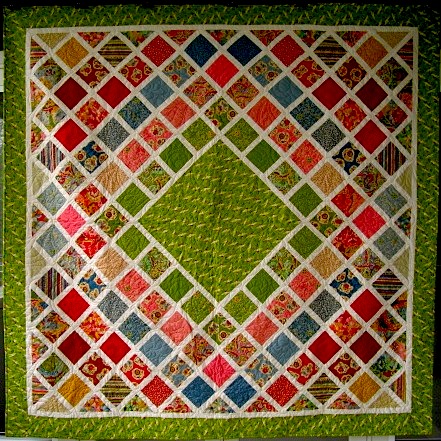 The fabric is for the most part from the "Charisma" range designed by Chez Moi for Moda. It's so old I can't remember when it was released.  Possibly 2006. 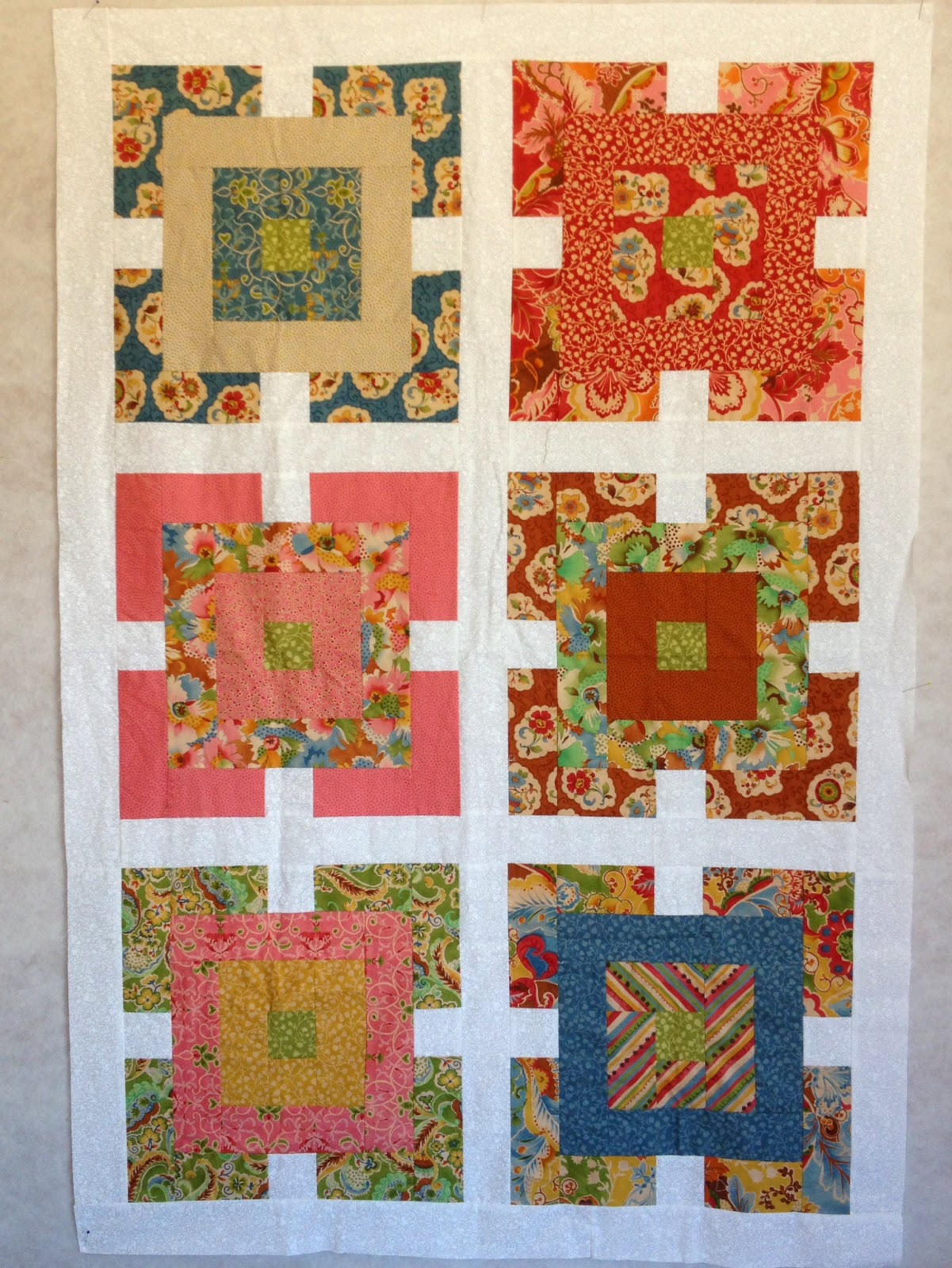 The blocks are 14" square.  I made a couple of them in early 2010 trying to construct blocks from  jelly rolls.  Even though I had yardage, I cut strips 2.5" wide.

I still had the sashing fabric, a white on white pattern and before I knew it, there were 6 blocks, then 12.

My "Charisma" stash doesn't seem to grow any smaller.  There will be enough to make an interesting border and a reasonable sized quilt. 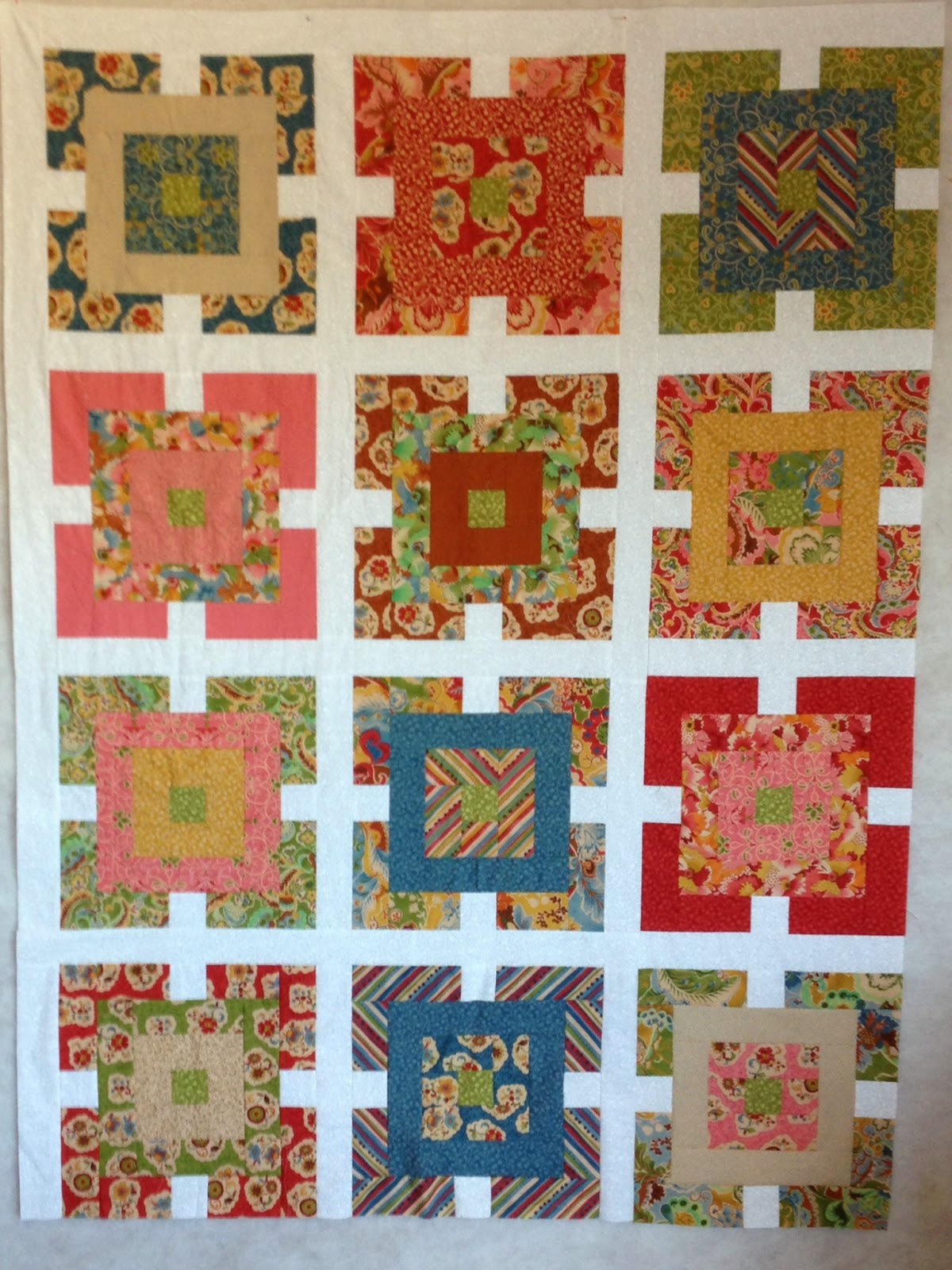 Only after putting this post together and previewing it did I realize that I put the middle row, bottom blocks together in the wrong places.  It won't take much to rectify that.  Just a couple of seams and a free afternoon.

I'll leave you with a funny sign I came across this afternoon. 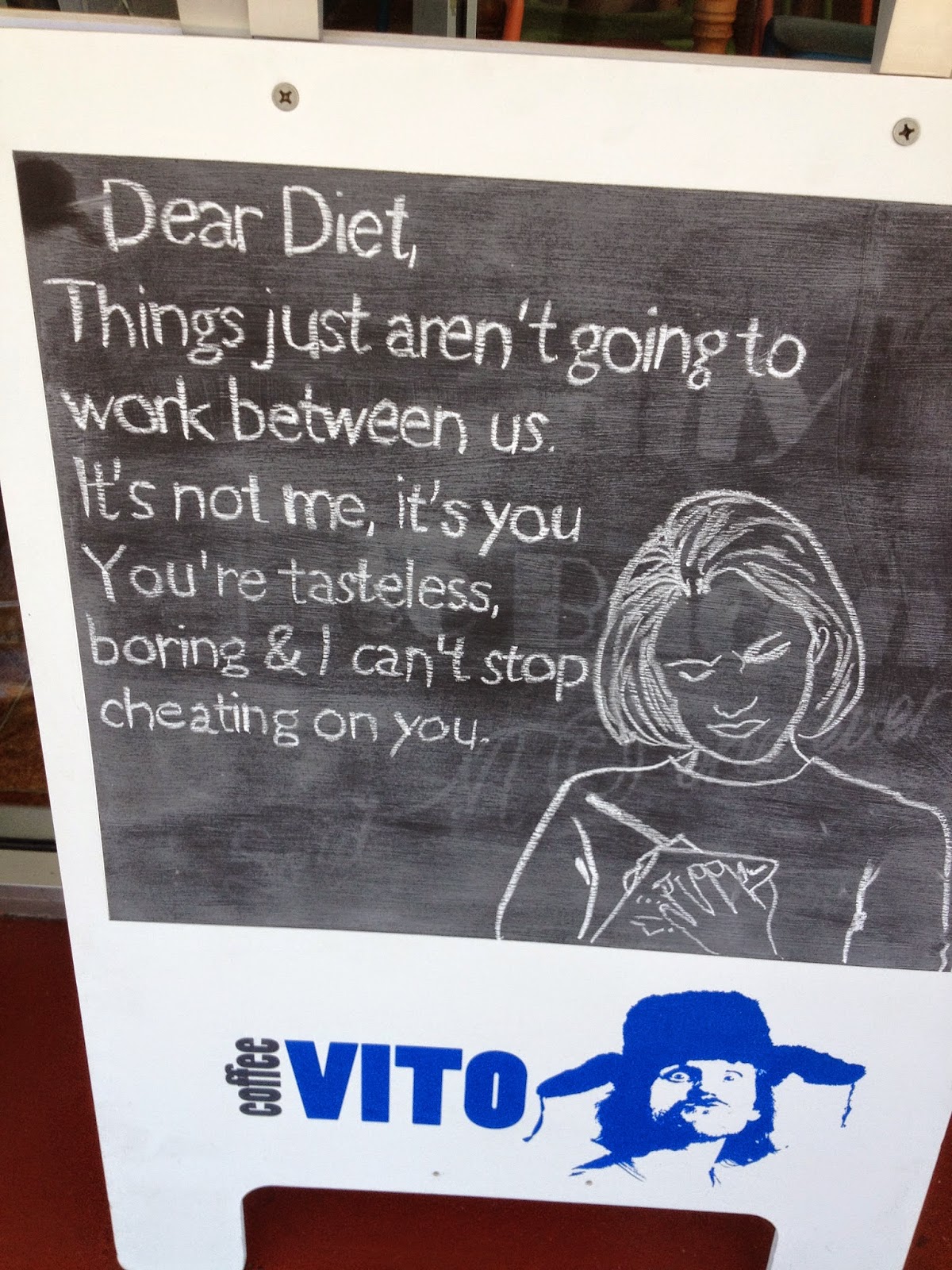 I hope it made you smile too.

Not one to do things in a methodical structured fashion, I find myself frantically hand quilting to a deadline. 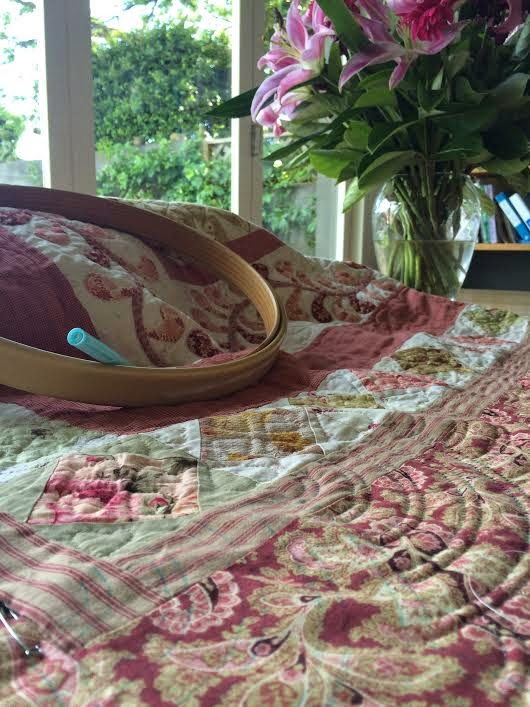 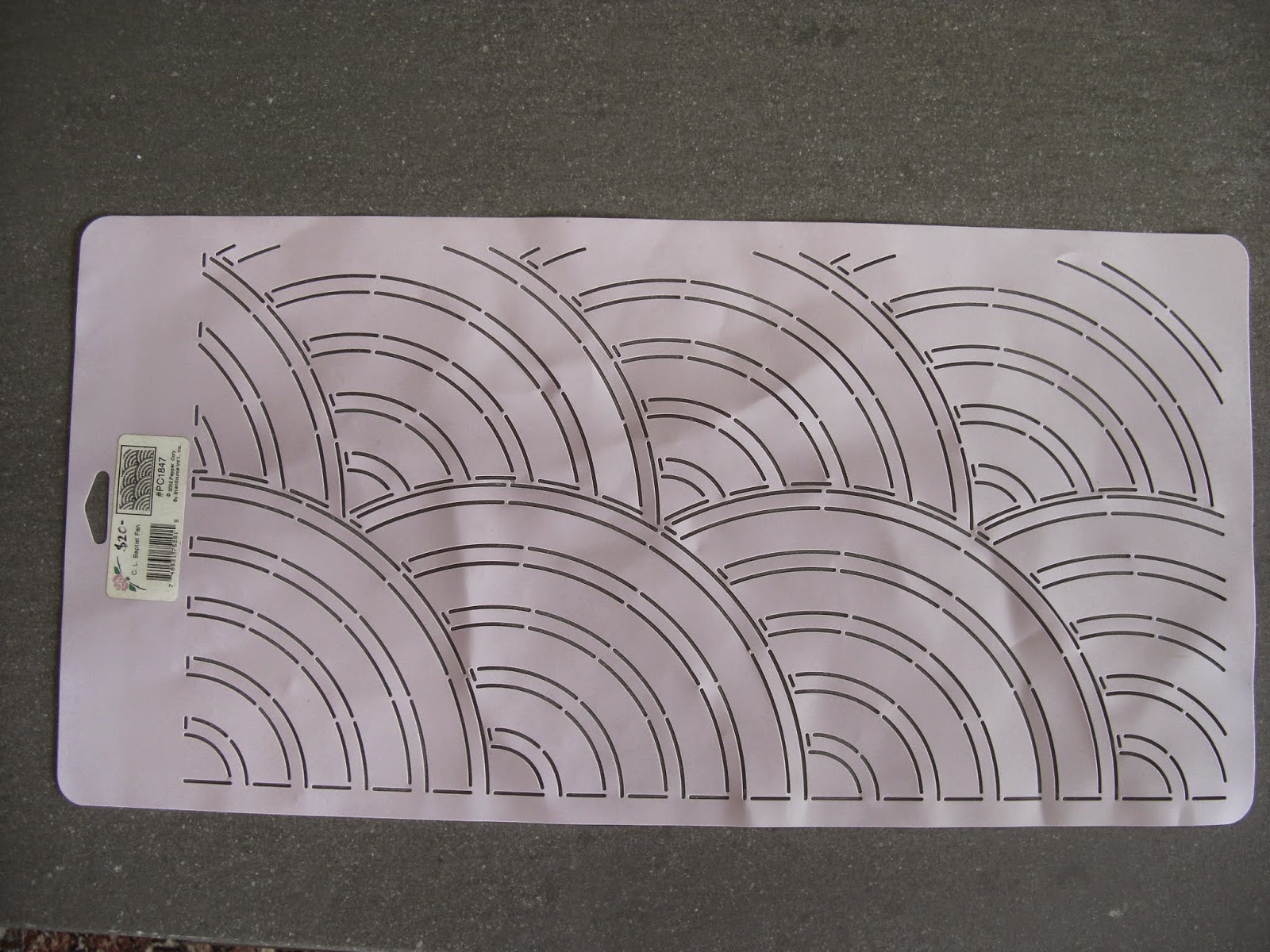 It's a double baptist fan pattern.  Not a single, a DOUBLE.  That may explain why it has taken so long to finish the quilt.  But the other, correct reason is that knowing that the very intense quilting wouldn't really be seen produced a quandary.  After having quilted one border the dilemma was:

do I undo the quilting and start again with a simpler, more expedient pattern?
or
do I just keep going to the bitter end?

After much hand wringing and just ten years you can see what I decided.  After all that work, I just couldn't undo it, so now I find myself on a deadline.  Which is where you came in.  More later.  Right now,  I'm back to quilting.
Posted by liz at 11:13 AM 13 comments

Well, that was a good break.

No, I haven't packed up my quilting gear and gone home.  I'm still playing.    Here is my version of Bonnie Hunter's 2013 mystery quilt "Celtic Solstice".  Not yet quilted. I know I'm not the only one who has gone AWOL.  While I was away I kept an eye on blogworld;  I just didn't feel like socialising much.  But now I do and I hope you'll forgive the long absence and come back and visit me.

Most of my quilting time has been taken up finishing old projects: 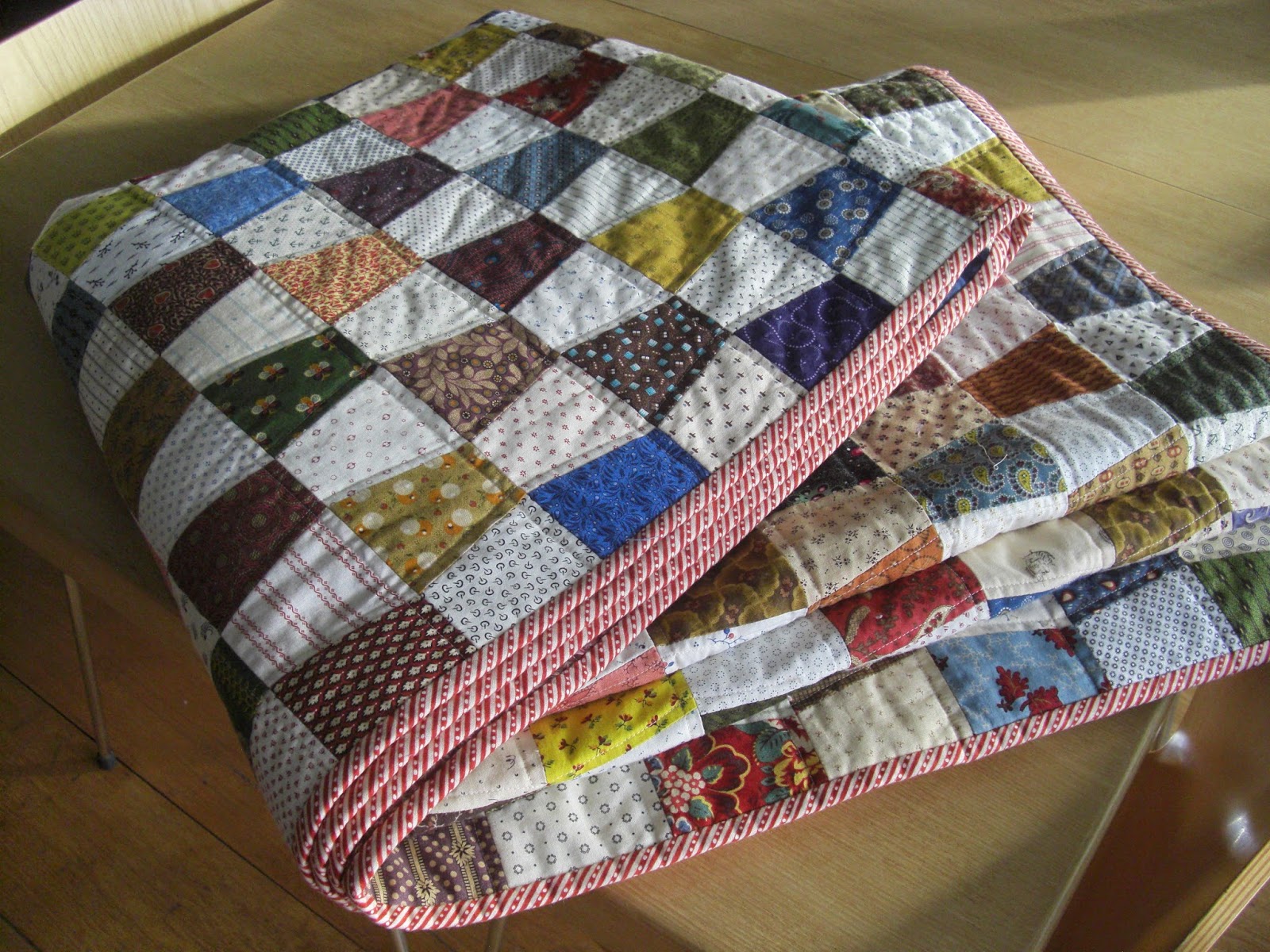 My 3" tumbler quilt.  I used my domestic sewing machine to quilt it myself.  Nothing too ambitious, just outline quilting. 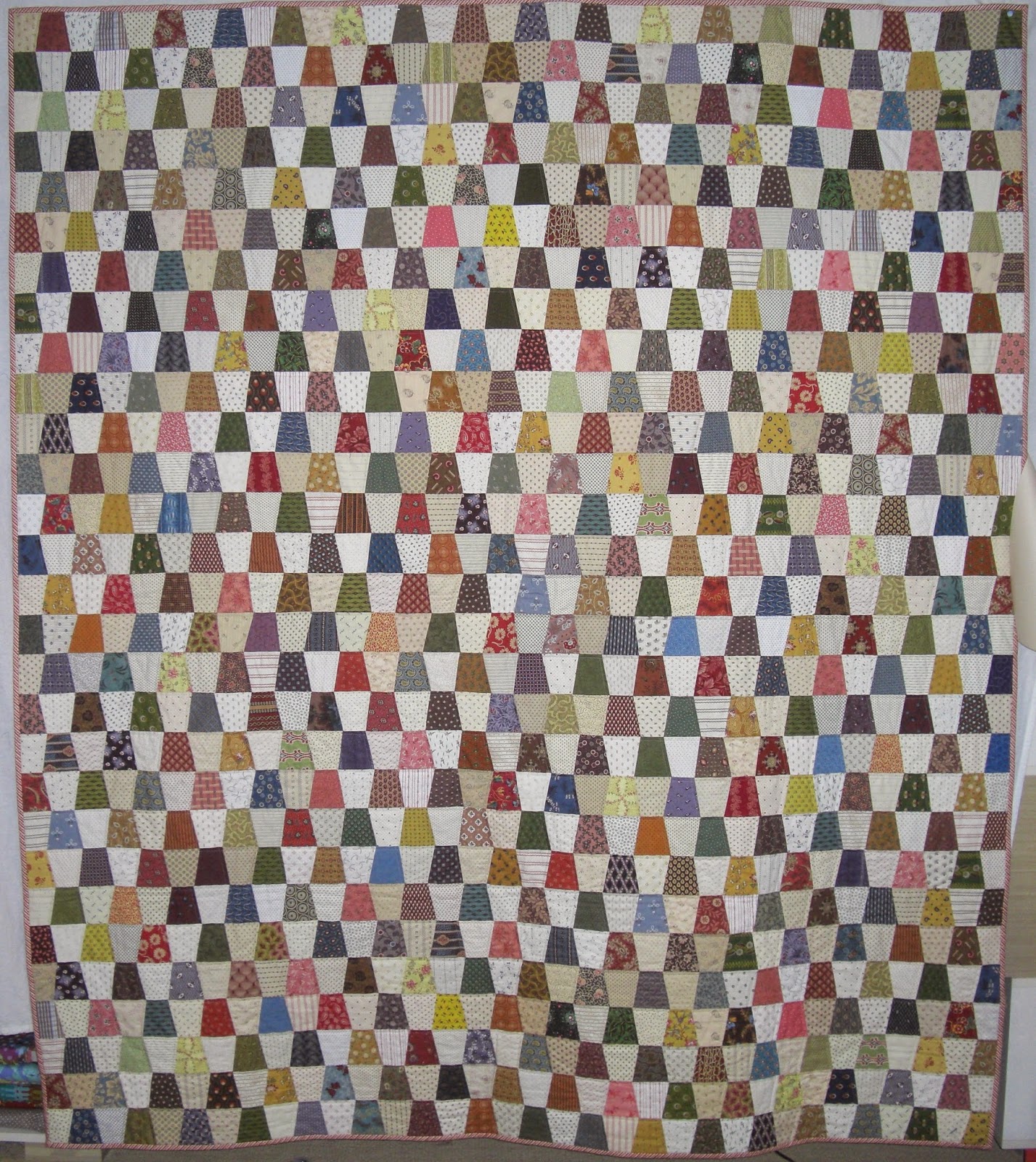 The back of my quilt is interesting.  I had a few left over tumblers so I thought I'd use them up instead of just throwing them into a shoebox along with some other orphan blocks. 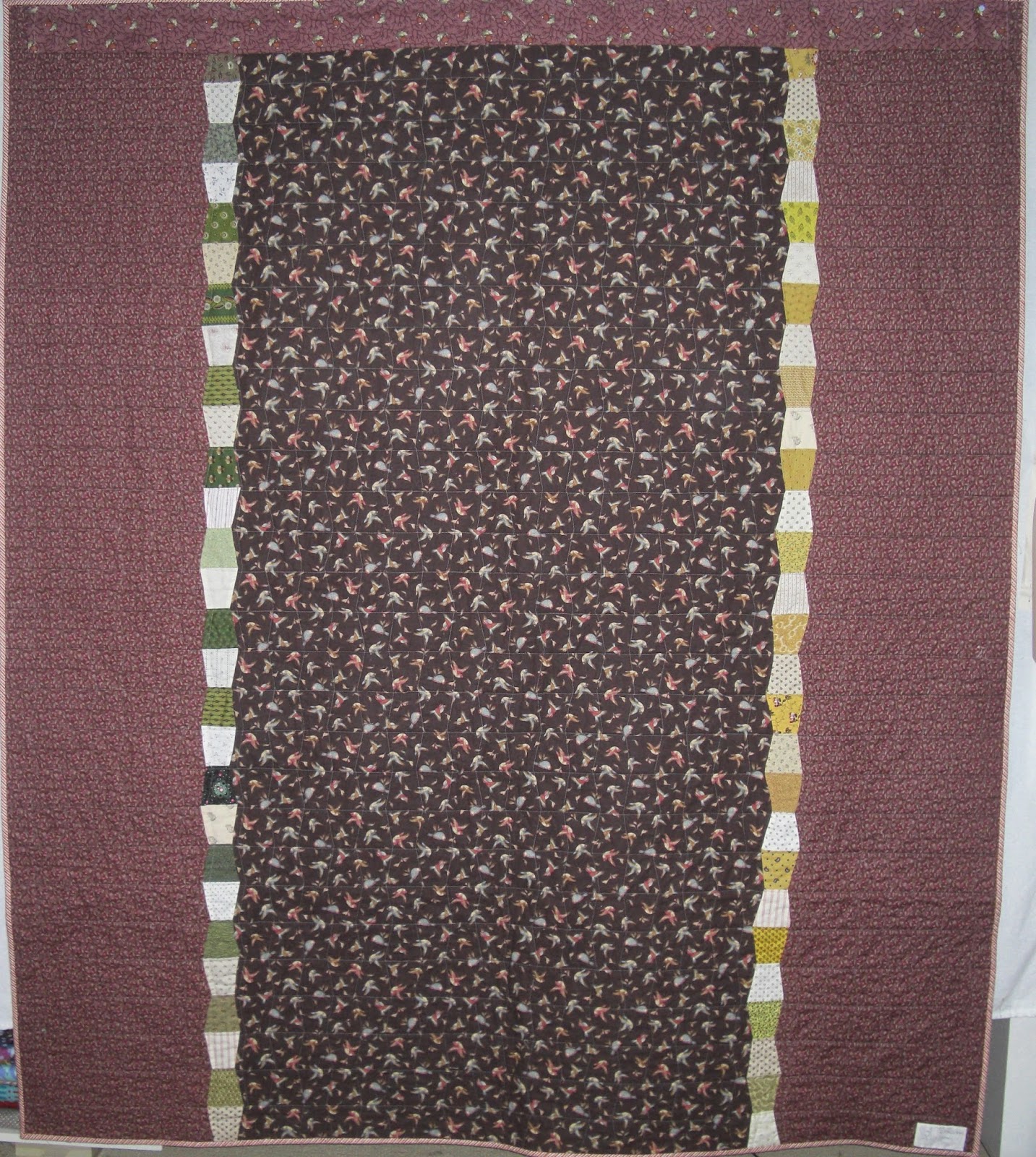 Lining them up with the tumblers on the front of the quilt proved beyond me.  But I still like the back.


And of course, there have been some starts too.  The quilt below is for my cousin's first grandson, Finlay.  I'll be visiting family in Yorkshire and Northumberland soon. 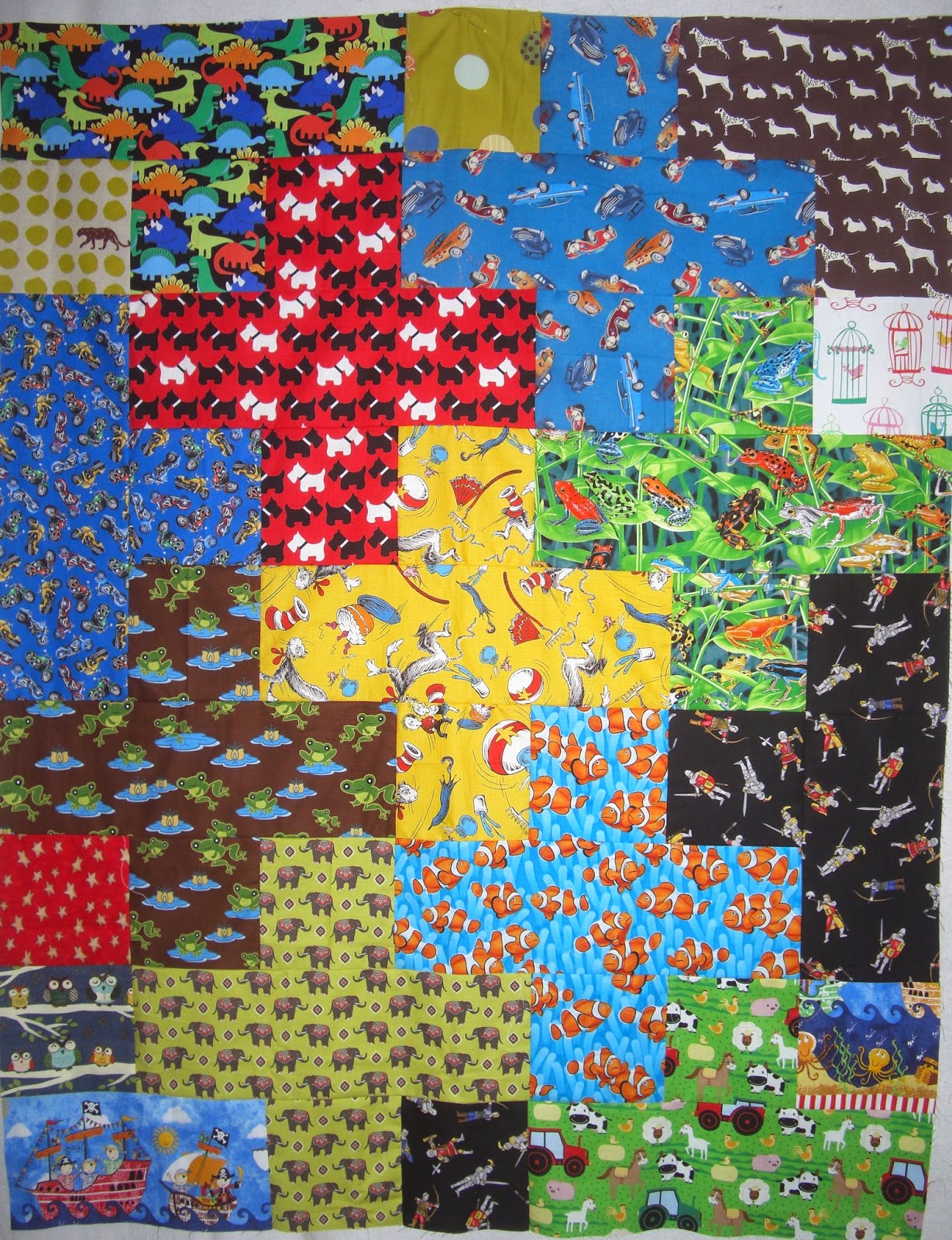 I am still financially supporting the fabric manufacturers and the shops.  And a few publishing houses as well.
Posted by liz at 6:24 PM 6 comments