December is such a busy time of year.  I think hardly anyone in the western world is not affected by a sense of urgency to have everything complete and tidied up before the end of the year, before the festivities, before normal life shuts down.

It is with that same desire to finish as much as possible that quilterie has been burning the midnight oil.  Another block  has been completed from the BTCT quilt: 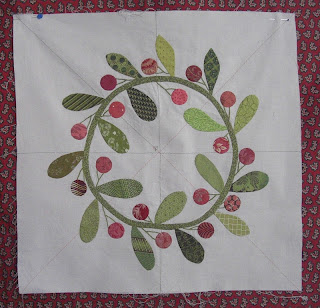 Lori's Cheddar Cheese and Crackers quilt-along previewed here has also been put together. 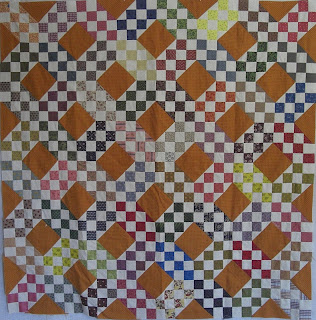 Notice that the 2011 challenge fabric makes an appearance in the bottom right hand corner.  If you think I have not been following my own challenge I will write about my success (or not) when I present my 2012 challenge.

Finally I would like to explain the post title.  First though, I will warn  those doing the Orca Bay  mystery quilt with Bonnie Hunter


Spoiler Alert
In her Part 6 clue, Bonnie practically dared us to reveal what we thought the pattern was, so I am throwing in my idea of what we are making: 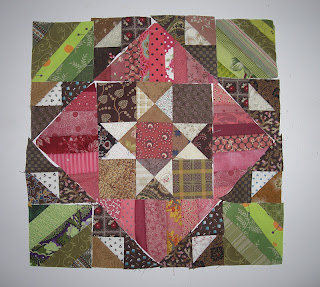 You can see that I am not 100% sure so I haven't actually sewn the block together.  I do like it though and I hope that this block does feature.  Whatever it turns out like, I have already decided to call my quilt "Red Herring",  since it is so obviously not reminiscent of an Orca whale, or even Orca Bay.
Posted by liz at 5:40 PM

I like what you have done with the Orca Bay parts. Who knows, maybe you will like this better than the real thing. : )

If the above block is correct then we are nearly finish.

Seeing your cheddar cheese quilt I'm tempted all over again to make one. I like your solution to Orca Bay too. Merry Christmas!

I am not participating in the mystery quilt but do like what I see as far as your guess for the layout. I think you might have guessed right.

You have been so busy sewing up some beauties!!

Love your BTCT block - are you nearly finished those blocks?

The Cheddar Cheese & Crackers QAL quilt is grorgeous - would love to do one of Lori's quilts!

And glad you are enjoying Bonnie's Mystery quilt! Wonder if you are right!?

Love your Lori's quilt version and your idea for Orca Bay ! XO

I think your layout may be right on! It's beautiful in any case. Have a Happy New Year.

I love your layout for the Orca Bay Mystery and I was quite convince you are a real Miss Marple and had cracked the Mystery... but... on re reading Bonnie's last Part there will be one Red String Triangle left over! Aahhh! The Mystery deepens.
What fun, cheers Pennie

Your mystery quilt layout looks smashing. Can't wait to see where this one is going.